Shopping Cart
You are in: Home > HOW TO USE A COAXIAL CABLE

HOW TO USE A COAXIAL CABLE

The electrical characteristics of a coaxial cable strongly depend on the geometric structure of the internal parts. Consequently, it is essential that they are not altered during handling and installation.

A coaxial cable that is trampled, improperly pulled or with excessive bends, will no longer function properly. What is worse is that the defect is uncontrollable and in any case will only be found after the wiring is finished.

This inevitably involves remaking the effort, wasting time and money. In most cases, the place where you work is not exactly comfortable (roofs, low attics, over stairs etc.) and it can happen that you step on the cable or form knots. In this case it is advisable not to use the cable (which can be saved, in the functional parts, to make patch cords (TV-socket cables).

In this section we will illustrate how to best use the coaxial cable so that it keeps the characteristics declared, ensuring perfect signal distribution.

M&P coaxial cables are packaged so that they can be unwound in the most correct way. It is absolutely necessary to avoid unwinding the coaxial cable from inside the coil, in this way infact a spiral will form, which can damage the internal tape and, in the worst case, it can form knots with substantial damage to the impedance. We strongly recommend using special cable unwinders, such as our ARIANNA or similar, to avoid the formation of knots and crushing. 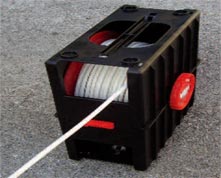 The most correct procedure is to insert the coil into the unwinder (for example our “ARIANNA”). This will greatly facilitate the correct and easy unwinding of the coaxial cable (even in the absence of collaborators). 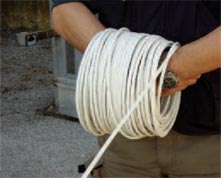 If you don't possess a professional unwinder, it is advisable to insert both forearms inside the coil and rotate it in order to deposit a sufficient amount of cable on the ground. The operation will be easier with the presence of a collaborator. 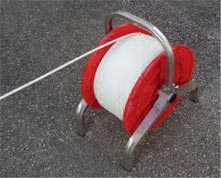 In case of cable on a reel, use the tripod. 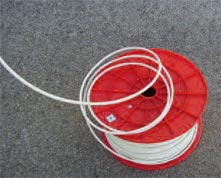 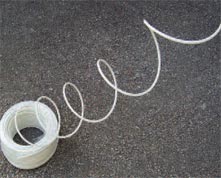 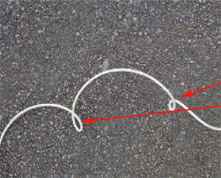 Absolutely avoid to place the coil horizontally on the ground, pulling out the spiral cable and turning it outwards.

KNOTS CAUSED BY CABLE UNWINDED IN SPIRAL ARE ALWAYS TO AVOID !!!

IMPEDENCE - BEFORE THE KNOTS

IMPEDENCE - AFTER THE KNOTS

RIGHT TABLE: After we damaged the coax on purpose

The passage inside internal duct (corrugated) is undoubtedly the most stressful event for the coaxial cable (and for the installer). In fact this one is pulled with a force that in some cases can be several kg. (See chapter “replacing an old cable). All materials subjected to traction tend to stretch with consequent thinning. If this happens to the coaxial cable, especially the conductor or the dielectric, the attenuation and impedance will inevitably suffer negative variations. The best way to "pull" a coaxial cable inside a corrugated tube is to hook it to the probe or to the existing coaxial cable, with central conductor, tape and braid firmly joined together and diligently taped.

With this method, however, the force to be exerted must be lower, as the additional strength of the sheath is not used, whose mechanical resistance, in M&P coaxial cables, is particularly taken care of.

Furthermore, by choosing the coaxial cables of the M & P Elite series, thanks to the very strong braid with 24 SPOOLS (50% more crossovers), you have an exceptional mechanical strength.

To verify the final result of our projects, we were not satisfied only with laboratory tests, but we wanted to measure the electrical response of the coaxial cable after having stressed it exactly as it happens on a construction site, where the tensile force made by jerking, is not certainly as constant as that of a laboratory calibrated machine. The result has definitively put the quality seal on our commitment and company philosophy. 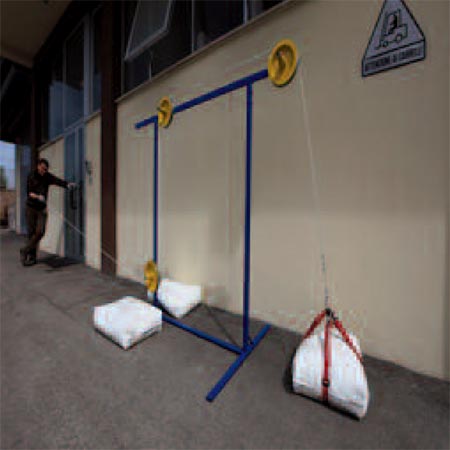 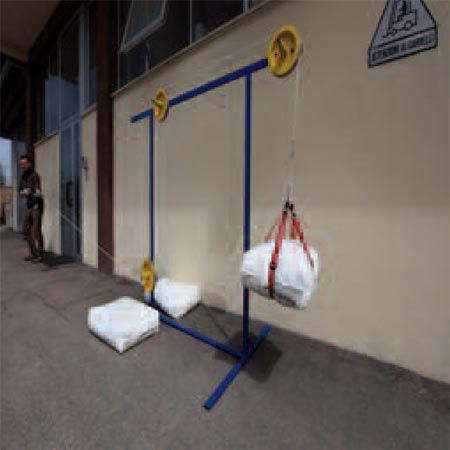 The mechanical properties of the aluminum-magnesium alloy ensure that the coaxial cable doesn't suffer elongation up to the breaking point itself.

Traction test of the internal conductor: at only 13 Kg the conductor stretches by about 15cm. At this point, even if the cable has not been torn apart, all the electrical parameters have failed.

We install particularly soft copper (well annealed) in our Elite coaxial cables. Its softness is offset by the hardness of the braid. The softness of the inner conductor does not take over the dielectric in case of tight curves in the ducts.

With CCS (copper-plated steel) is the opposite. A 0.81mm CCS conductor can withstand pulls up to 19kg without tearing or stretching. However, even if the coaxial cable is physically perfectly intact, the electrical data is out of the norm. Furthermore, by the same principle, a 90 ° angle on a ccs cable definitively compromises its operational working.

(The purple line indicated 75 Ohm ± 3 Ohm tollerance.
Notice that it has already been heavily compromised 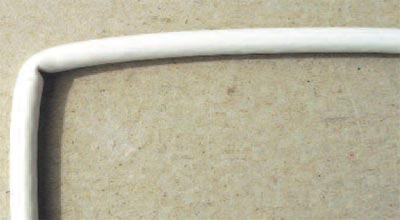 Impedence after a 90° bending

In case of exposed laying of the coaxial cable, use suitable cable ties or cable fairlead. The "tip shoots" are to be avoided as ring bottlenecks will form in the cable, causing disastrous consequences for the SRL.
In the wall's corner or above the doors or windows, avoid making tight bendings with the cable: in this case it is necessary to respect the minimum radius of curvature, declared in our catalog and datasheet. In external ducts, there is no disadvantage of having to pull the coaxial cable, but it is nevertheless necessary to have certain precautions during the bendings, avoiding 90 degree angles.

This operation must also be performed in a workmanlike manner, as it is a critical point and an imperfect assembly can form leaks, mismatches or interference. 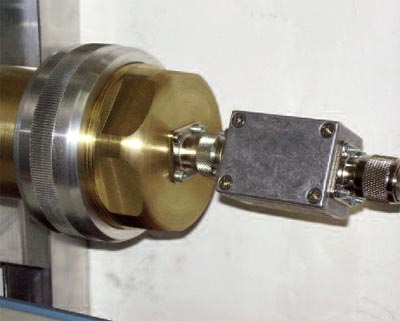 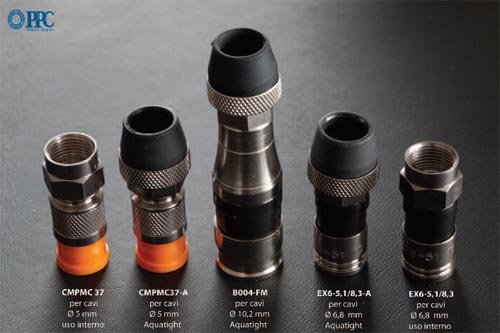 In our laboratory we have performed all the tests, according to CE regulations, to measure the efficiency of the cable shielding. We then wanted to verify the behavior of the connectors in the same area. Well, in the presence of a medium / low quality connector, the shielding efficiency drops from 100 dB to 70 dB, meaning that at that point the system remains exposed to external interference. A good connector, on the other hand, can also guarantee over 100 dB of shielding efficiency (PPC). It is essential that this correctly and tightly assembled  at the connection point. A good connector also protects from moisture and oxidation. There are several connector models available on the market, and given the little impact that these have on the overall costs, we recommend using excellent quality compression connectors such as PPCs.

In this way it is also possible to make joints without compromising any electrical parameters.

SHIELDING ATTENUATION and TRANSFER IMPEDANCE OF DIGISAT 5 ELITE WITH VARIOUS TYPES OF CONNECTORS.

As you can see, the standard is more restrictive at low frequencies
where impulsive disturbances are more harmful.

The high stability and consistency of this cable on all frequencies is clearly evident. The colored lines indicate the limits imposed by the EN 50117 standard.

The values worsen while remaining within the parameters established by the legislation.

As you can see, the standard is more restrictive at low frequencies
where impulsive disturbances are more harmful.

It's the last element of the distribution system, and is generally the point where the cable suffers inappropriate twists, with bends sometimes of 90 °. The probability that negative “notches” are formed in the attenuation curve is high. Fortunately, in the new systems the flush-mounted boxes are larger and this facilitates the work of the antenna player, allowing the cable to be adapted with a curve more suitable to its structure.
Regarding the older systems, it is recommended to be extremely careful so that the cable does not make excessively tight bends or is crushed inside the socket. For this purpose, the most highly recommended coaxial cables should have an overall diameter of 5 mm. 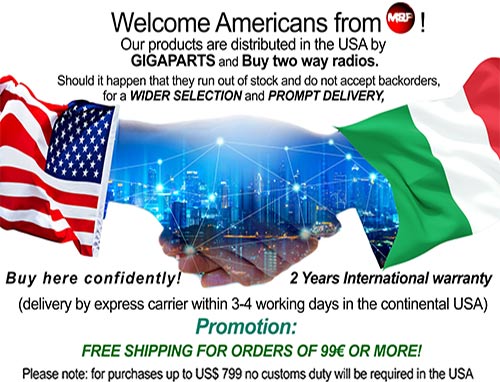